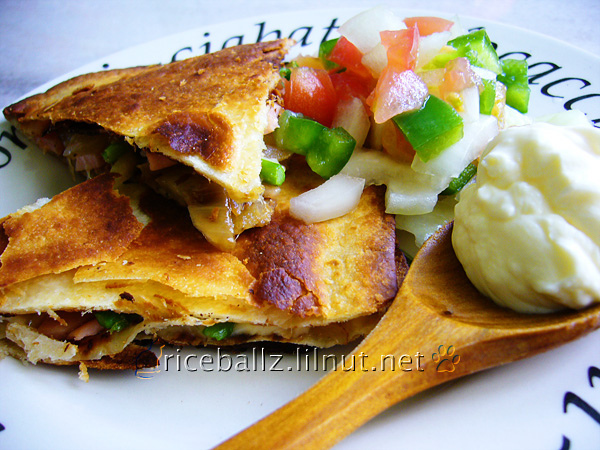 we've been hankering for the quesadillas ever since dining at Riblee's. Short of driving back to Riblee's we decided to recreate the dish. Call it giving into the craving, if you will, but the photos of Riblee's quesadillas is a powerful suggestion.

I believe in making the fillings as simple as possible, to minimize chances of backfiring.

Directions
Heat up butter in frying pan, add in onions, saute until caramelized.
Add in the rest of the ingredients, stirfry until cooked through. Set aside.

To assemble, lay a piece of tortilla flat on an oven proof tray.
Sprinkle liberal amount of cheese.
Spread fillings on top of cheese.
Top with more cheese and cover with another piece or tortilla.
Bake in preheat oven until cheese melts and holds everything together.
Slice like pizza, serve with sour cream and picco de gallo sides.

The end product is quesadilla worth giving myself a pat on the back for. I know its kinda flat-ish and the fillings are not visible in the photo, but trust me, I think I've nailed it. I am looking forward to remake this with different fillings, and be less enthusiastic about the last part - warming in the oven. My quesadilla seems a tad too brown, but compensated by being crispy.

I'll make sure to take step-by-step photos the next time round. Try it out, its really that simple!
Quesadilla