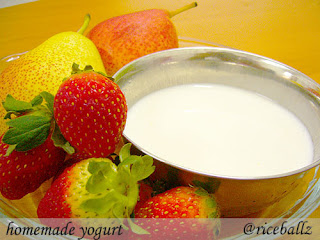 Of late, I am in the "make everything from scratch" phase, and I figure its a good chance to make batches of homemade yogurt again. I missed the taste and texture of homemade yogurt, something that is way superior than even those selling in upmarket organic complexes. Photo is from my previous post of homemade yogurt.

I also tweaked the recipes and method, since I figure leaving dairy product in room temperature for prolonged hours is not such a good idea. Also, I am fine with the thickness of the final product, so no thickeners necessary.

Why boil the milk?

Heating the milk is done for a few reasons:

To sterilize/pasteurize the milk so that the yogurt bacteria/culture as a hospitable place to grow in. It is not desirable to also incubate possible "bad" or contaminating bacteria that might be present in the unsterilized milk.
Boiling the milk helps to a smooth thick yogurt.
Boiling the milk also helps stop the whey from separating out quite as much. (The "water" you sometimes find on the top of your yogurt is whey.)

To avoid contamination and spoilage, I sterilized more small jars and divide the end products into smaller serving sizes.

Some of the ways I consume the yogurt, other than eating it as it is: